Back to overview South Africa

This sector has been developed by a group of motivated boulderers around Karsten Oelze in spring 2001.

Access:
From the parking in the beginning like to the sector Roadside. After about 10 minutes at a prominent "stone-man" turn right like to the sector Fortress resp. Fortress Boulders. About 5 minutes later you come to a fork in the path. Follow the trail towards the Fortress, which leads to the right and uphill through boulders ("stone-men"). About 200 m further the pathturns to the right. Turn to the left here. 30 m further you come to boulder A directly next to the path. Boulder E is lying a bit above on a plateau. On the edge is standing a "stone-man". 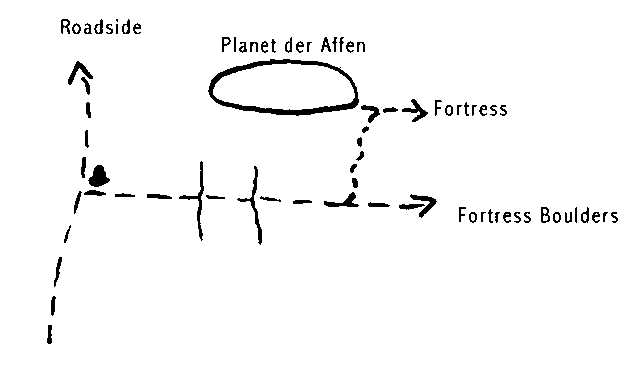 The boulder problems:
Almost all problems are sitting starts and most are athletic.
The landing is good, but a crashpad is useful. The problems have been marked with chalk-arrows. SD = Sitting start

Grading:
All gradings are a rough impression of the difficulty. We did not concern too much about the grades while looking for all these new problems. Later we tried to give numbers.
Have Fun!

Boulder A
1 Start on edge and out over the roof. SD, 6b+
2 Rockrat
Like 1,but traverse to the right arête und take this to the top. SD, 6c+

Boulder H
1 Overhanging Duelfering. SD, 6a+
2 Guano apes
From 2 edges to the right to jug and overhanging up. SD, 7a

Boulder I
1 Start on the edge opposite of boulder B. SD, 5